Death on Cyprus by MM Kaye 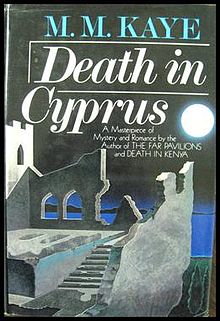 Hello, folks! First, I want to assure you all that the reports of my death have been greatly exaggerated, as Mark Twain observed. Vintage Novels has not been abandoned; it just had a brief hiatus while I took August to focus on preparing my upcoming novel A Wind from the Wilderness for publication, to say nothing of trying to take some well-deserved rest.

There has, however, been a change in my reading schedule lately - between trying to binge some more recent novels for market research, and gulping my way through double the amount of non-fiction as I normally read, the time I've had to devote to vintage/classic literature has been somewhat curtailed of late. This is sad, but unavoidable for a busy author of historical fantasy fiction.

One vintage novel I did have the opportunity to read lately was MM Kaye's whodunit Death on Cyprus. I've read a couple of Kaye's books previously - when I was small I remember being enchanted by The Ordinary Princess, and I read Death in the Andamans a few years back.

Written and set in the 1950s, Death in Cyprus follows Amanda Derington on a holiday in (astonishingly enough) Cyprus. The trip is marred by the sudden death of a travelling companion - apparently suicide. But as Amanda learns more about the deceased, and the tensions seething among the small community of English expats on the island, the more she suspects foul play.

Then more lives are lost, one of them very nearly her own...

If I was to describe this novel in a few words, I'd probably call it "Mary Stewart, but not quite so good." Some people are just the peerless masters of their specific genre. Death in Cyprus is very much the same kind of romantic suspense story (in exotic locations) that Mary Stewart did so very well. Kaye's description of the island is beautifully vivid, although her historical comments are a little uninformed (I'm fairly certain Berengaria was never left waiting in Cyprus for very long, for instance) and her characters aren't as smart and formidable as Stewart's. Then, while both Stewart and Kaye employed similar romantic tropes (especially with their mysterious, take-charge heroes), Stewart's heroines tend to hold their ground better - no Stewart hero would get away with calling the heroine an "infuriated kitten".

Still, although they are writing very similar books, it might not be fair to compare the two authors too closely. Death in Cyprus was an evocative, sun-drenched mystery of the kind that you read in order to feel as if you've been on holiday in the same sort of place, with a lot of larger-than-life characters - Miss Moon, the old English lady living in a shabby old villa in a succession of eccentric colour-coded jewel collections, one for each day of the week, was particularly fun. Unravelling the mystery involves unravelling the secret past connections between all the different characters, which gives the book a lot of soap-opera appeal as what we know constantly shifts.

Death in Cyprus is an enjoyably fluffy whodunit for anyone who enjoys Agatha Christie or Mary Stewart - intentionally set in the halcyon days before civil war broke out between the Greeks and Turks. Have you read any of Kaye's books?

Find Death in Cyprus on Amazon or The Book Depository.
Suzannah at 9:00 AM
Share