The Road to Waterloo by Ronald Welch 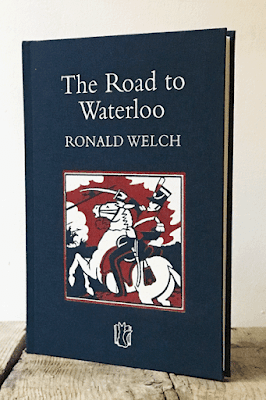 The other week, a surprise parcel turned up in the mail for me. Inside was a beautiful, clothbound new edition of a never-before-published Ronald Welch book, The Road to Waterloo.

For those just joining us, Ronald Welch was an English schoolteacher and historian whose Carey Family Series of novels for boys follow the thrilling adventures of the members of a noble family through English history. With their rigorous focus on military history, the Carey series is a lot like GA Henty, but quicker and easier to read.

Welch's books have been out of print for years, but have recently been reissued in beautiful limited collectors' editions by Slightly Foxed. Now, Slightly Foxed have done us one better with The Road to Waterloo, a previously unpublished novella.

Our hero in this short book is James Carey, a 17-year-old cornet in the Light Dragoons, who will go on to become the benevolent uncle in Nicholas Carey. One of the things that struck me in that book was how different the grown James Carey was from most of the other Carey men. While most of the Careys in this series have brilliant military careers, James is different: he left the army in order to become an explorer and philanthropist. I found him extremely refreshing as a standard of exemplary manhood that was peacable rather than violent.

So when I realised that this novella was about James's early military career, I was immediately intrigued.

Set in the week leading up to the great battle of Waterloo, The Road to Waterloo follows James Carey as he sees war for the first time. It's a tale of spies, skirmishes, and maneuvers as Napoleon marches north at the head of his army and Welch writes with the assurance of an author who's done his research and knows the landscape.

Oddly, the book closes on the eve of the battle itself. Possibly Welch thought this was too well-known to retell (me, I actually skipped the Waterloo segment of Les Miserables, so I still know nothing). But he makes it work, because this is above anything else the story of how James Carey comes to rethink his life in the army. Despite his interest in military history, Welch never glorified war, possibly because he'd been in it himself. Though they never become depressing, his books are honest about the boredom, violence, and waste.

My only complaint about The Road to Waterloo is that it's not longer. It would be fun to read more about James Carey's adventures as an explorer after he left the army. But, it's also a valuable addition to anyone's Ronald Welch library, an absorbing adventure yarn with plenty of good historical detail and a hero who's a little different.

You can find The Road to Waterloo at Slightly Foxed - at least, until the limited edition sells out!